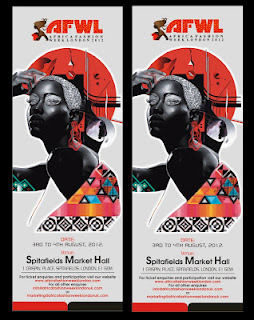 The organisers of Africa Fashion Week London are pleased to announce Guaranty Trust Bank as one of this year’s official partners for London’s premier fashion event scheduled to take place on 3-4 August 2012 at London Spitalfields.
Guaranty Trust Bank, one of Africa’s largest financial services providers, is once again set to reinforce its position as a foremost African financial brand and a proudly African, truly international institution with its support of the biggest African fashion event out of Africa to take place in London in under a month.

“We are proud to have on board such a reputable financial institution which has time and time again proved their support of various art and design initiatives in Nigeria and beyond. GTB will not only lend their support to AFWL but also to three of our designers who will be designing a design each in collaboration with GTB and take part in an GTB sponsored fashion show,” said Ronke Ademiluyi, founder and CEO of Africa Fashion Week London.

Established 20 years ago in 1990 and with subsidiaries in all Anglophone West African Countries and the United Kingdom, Guaranty Trust Bank has over the years, keenly supported artistic expressions especially those of African origins in various parts of the world.
In what is set to be the biggest fashion extravaganza of the Olympic summer, London’s hip Spitalfields Market will play host to over 60 African and African inspired designers with back to back runway shows and exhibitions.

With stellar names of African fashion such as Adebayo Jones, George Adesegun and Anita Quansah, high profile partners such as Mizani and MoneyGram alongside GTB, Her Excellency Chief Mrs. Erelu Bisi Fayemi as a patron, and leading media sponsors such as FAB Magazine and OH TV, Africa Fashion Week London is set to be the finest fashion event of this summer.
Tickets are now available to purchase from www.africafashionweeklondon.com