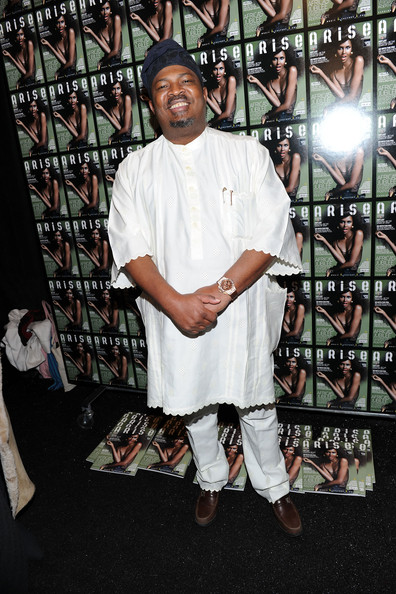 ARISE NEWS, will have a strong African footprint and serve underserved communities in the USA and other parts of the world, supported by a further eight bureaux around the globe stretching from Beijing to Rio de Janeiro.
A sister channel, ARISE 360, which will be entertainments-based with fashion, music sport and pay per view films, will start broadcasting toward the end of this year. The ‘arrival’ of the network was announced by company executives in London and New York.

Chairman and Editor in Chief of ARISE NEWS and ARISE 360 is a leading African media entrepreneur, Nduka Obaigbena, owner and publisher of the global glossy style, fashion and culture magazine, ARISE, and the publisher of several other titles including one of Nigeria’s biggest and most influential daily newspapers, THISDAY.

Mr Obaigbena said: ‘We will attract a global audience interested in emerging markets, developing countries and evolving politics. With headquarters and bureaux throughout Africa, Asia, Europe and the Americas, we are ready to speak to our audience and give them a voice as well.

‘We are a new international network established to reflect the new world order not hardwired to the old and built to reflect the modern way news is consumed. Nowhere is this more important than in the emerging economies.’Mr Obaigbena stressed: ‘There will be no state funding and no state agenda. Our coverage will be balanced, comprehensive and completely independent.‘Our efforts will concentrate on robust journalism anchored on imperatives of the marketplace.’

Rob Beynon, a former executive producer with ITN and Sky News and now International Head of Operations at ARISE NEWS, said a team of TV news experts had been assembled from around the globe.

In the last decade Africa’s overall growth rates have quietly approached those of Asia. According to projections from the IMF, on average Africa will have the world’s fastest growing economy of any country over the next five years. ARISE News will uniquely cover the changing face of Africa with in depth analysis.’

ARISE NEWS was welcomed at the recent World Economic Forum at Davos, Switzerland, by senior politicians and business leaders around the globe.
Former UK Prime Minister Gordon Brown said ARISE NEWS would give a boost to young people living in Africa.‘The future is in the hands of young Africans themselves. The more channels like yours that can make young people proud of Africa, the more we’ll see young people seizing the opportunity’.

Trevor Ncube, Executive Deputy Chairman of the Mail and Guardian Media Group in South Africa said: ‘ARISE NEWS is the fulfilment of a dream we’ve had for some time. Unless we begin to tell our own story we’ll continue to complain about the perceptions held about Africa in different parts of the world’.

ARISE NEWS will be live on cable, satellite, mobile devices, and the internet twenty four hours a day, seven days a week.

‘Wherever and whenever there is a major breaking news story, we will cover it aggressively, especially on the under-reported continent of Africa,‘ said Global Editorial Director, David Glencorse.
“We will take advantage of the latest technology and social media to bring real-time interaction with newsmakers and news events. Our international focus is on global news and current affairs from a distinct perspective, while ARISE America will focus on US news and current affairs through the eyes of communities currently ignored by mainstream media‘.ARISE News will offer advertisers a unique reach amongst an affluent and influential audience.

Following the test broadcasts of last Thursday and Friday, the ‘soft launch’ phase will begin today (Feb 4) and lead to a full broadcast operation in March.

ARISE News is broadcasting across Europe on SKY Channel 234. The company is currently negotiating other major distribution deals across the globe.