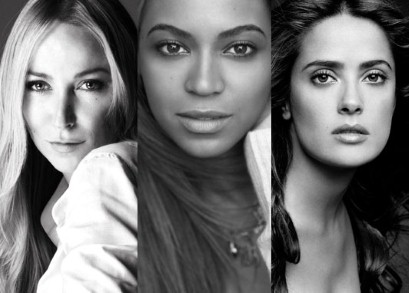 Beyonce Knowles-Carter, has teamed up with Salma Hayek Pinault aka Salma Hayek and Gucci creative director Frida Giannini to create a new female-empowerment initiative called Chime for Change.
According to a press release, Chime for Change’s goal is to “provoke, collect, and share powerful stories of girls and women globally,” a cause Giannini calls “the emergency and the opportunity of today.” She continued, “I hope that through Chime we can help the voices calling for change to become so loud that they cannot be ignored.”
The foundation will focus on aiding women in three specific areas: Education, health, and justice–and accept donations through its website. Ten short films, featuring new music by Bey and narrated by Hayek Pinault, will be released in conjunction with the initiative; the first of which was debuted last week at a TEDxWomen luncheon in Long Beach, CA.

According to beyonce “Girls have to be taught from early on that they are strong and capable of being anything they want to be. It’s up to us to change the statistics for women around the world. I’m honoured to be in the company of women who live fearlessly and set an example for the next generation of young ladies,” . Along with Hayek Pinault and Giannini, Chime for Change is also supported by the likes of Meryl Streep, Julia Roberts, Arianna Huffington, Jada Pinkett-Smith, and non-woman John Legend.