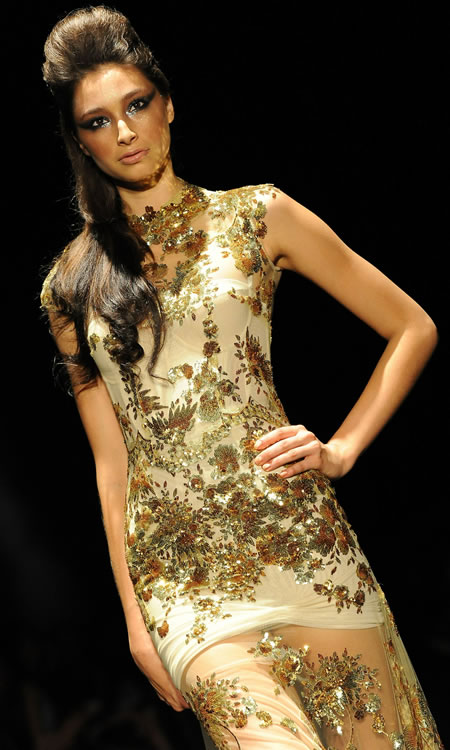 Source: Al Arabiya
“This is a first step towards the society to accept the idea. We hope that this event becomes a yearly one. We also hope that international designers would come and design here,” said Summer Husain, editor of the lifestyle magazine “Layalina”.
Young fashion enthusiasts in the occupied West Bank gathered in Ramallah to witness the first Palestinian Fashion Week.The event was sponsored by a Palestinian modeling agency, a Palestinian magazine and professional photographers.

Tamer Halabi, a 27-year-old entrepreneur who opened the first modeling agency in the West Bank called “Modelicious Agency”, said there is a high demand from fashion shops and designers for local, trained female and male models to advertise their designs, especially on their social media pages.
During a practice session ahead of the fashion shows, Halabi admitted that most aspiring young models in the West Bank lacked runway experience.“This is the first fashion agency in the Middle East, so the models do not have much experience, so we face some difficulties during the practices, but we are pressing ahead,” Halabi told Reuters Television.

A modeling agency, said Halabi, is an “oddity” because modeling is controversial in the Palestinian territories.
Halabi, a Jerusalem resident, worked in a Jordanian model agency in Amman where he gained his experience, and established his own agency in 2012.
As female modesty is expected in the Palestinian society, exhibiting beauty in the public runs into social taboos. Therefore it is rare to see female Palestinian models.
Young models, both male and female, also say they encounter difficulties in a society that is still largely conservative.
“This is a field that not everyone accepts, and Arabs are not very open to it. But lately awareness has been growing among parents and people, and they are accepting (it) more,” 21-year-old model Lina Mansour told Reuters Television.
Organizers of the fashion event say, amid an uncertain political climate and a worsening economic crisis, modeling is regarded by some as contradictory to Palestinian values.
But aspiring models and designers say the development in this field is a positive move for Palestinian society.
In the past, most fashion events would incorporate traditional Palestinian embroidery or themes in their designs, but this fashion week showcased international designs, organizers said.

The event, which organizers hope will become an annual event, included three evenings of runway fashion shows at the poolside of one of Ramallah’s luxury hotels.
Organizers said some 250-300 people attended each night, with ticket prices selling at $5.50 each.
Palestinian designers were able to showcase their new summer collections of casual, evening and bridal designs during the fashion week.
Email Post
Labels: Palestinian Witness Their Fashion Week as West Bank Opens First Modelling School