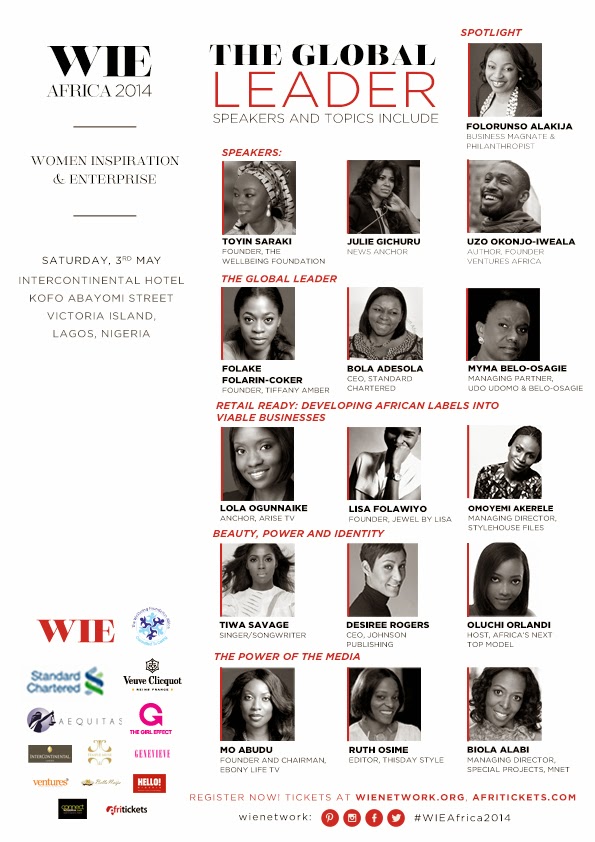 Her Excellency Toyin Saraki, Founder of the Wellbeing Foundation Africa; fashion designer Folake Folarin-Coker Founder of Tiffany Amber; Mo Abudu CEO of Ebony Life TV; Bola Adesola, CEO of Standard Chartered and television star Julie Gichuru will co-host the second annual WIE Africa, it was announced today by WIE Co-Founder and CEO Dee Poku. This is the second time that the WIE Symposium will be venturing into Africa following its successful launch in Cape Town last year. The symposium will break new ground in Nigeria by bringing together the continent’s stars and emerging young female leaders to empower and inspire the next generation. WIE Africa will be held on 3rd May at the Intercontinental Hotel in Lagos, Nigeria.

Tiwa Savage, the celebrated Nigerian singer-song writer is one of the many soon to be announced headline speakers. She has written songs for the biggest names in the music industry including Babyface, Kat Deluna, Fantasia Barrino, Monica and Mya, among others. Tiwa’s debut album Once Upon A Time was released in the summer of 2013 and experienced critical and commercial success.

Host Her Excellency Toyin Saraki, gave an inspiring talk at last year's event and is elated to see WIE Africa come to her country. She said:

“Following the immense success of the inaugural WIE Africa in Capetown, South Africa, I am delighted to welcome WIE Africa to Nigeria—my wonderful home country and Africa’s most populous nation.  Women play a great role in today’s global economy; and in order to make an impact in her sphere of influence, profession, vocation and passion, a woman must first be empowered to be health-seeking and achievement-driven. It is therefore truly wonderful to know that WIE Africa - Nigeria will be a further step to fulfilling the potential of the African continent and empowering women in leadership all over the world.”

Folorunsho Alakija, the self-made founder of Famfa Oil, and Nigeria’s first female billionaire, will speak in a spotlight session, sharing her learning on leadership with the ambitious and aspirational crowd that WIE attracts. At the time of confirming her attendance Alakija added:

“I am absolutely delighted to be attending the Women Inspiration & Enterprise (WIE) Africa event this year as I am extremely passionate about the empowerment and success of our women in their own rights.  I look forward to both contributing and listening to other successful female entrepreneurs as we share experiences of what I am sure will be an informative event, motivating and inspiring the next generation.”

WIE (Women: Inspiration & Enterprise), founded in 2010 is a global annual conference and community designed to empower the next generation of women leaders. WIE Africa is timed to coincide with the World Economic Forum Africa and will showcase the women taking a central role in shaping the Africa of tomorrow. WIE Africa aims to contribute to changing any negative perceptions of Africa as a whole by showcasing successful African women and innovation.

Dee Poku, Co-Founder and CEO of WIE said: “In this truly exciting second edition of WIE Africa, our mission is to get to the core of how Africa’s talent can both drive development within the continent and have global impact. I’m so thrilled about the incredible caliber of people we’ve managed to attract to the event.”

The day will be packed full of panels and workshops featuring speakers from the worlds of politics, business, philanthropy, media, fashion, entertainment and the arts.  Topics for discussion include: “Retail Ready: Developing African Labels Into Viable Businesses”; “The Power of Publishing: Women’s Role in Shaping Africa’s Media Industry”; “Our Future: What It Means to Empower African Women”; “Afropolitans – The Return Home” and “What can Africapitalism mean for Africa”.