Flamboyance Infused In Style and Exploding colours.
By Millicent Arebun. 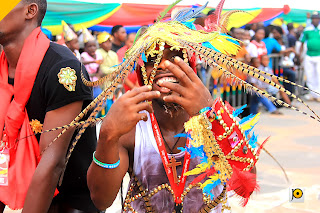 The famous Lagos independent square TBS exploded with activities last Saturday as surging crowds brimming  with excitement and at their best party mood arrived in droves from all over the metropolis, and the nation as a whole, as it played host to the Lagos carnival, the high point in a series of events earmarked to celebrate the yearly black heritage week Lagos state. The style ,high fashion, colours,   flamboyance and sheer glamour at this year edition of the carnival was simply breathtaking. 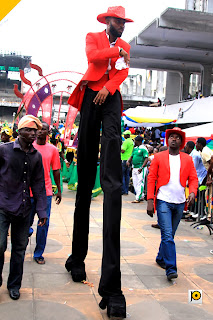 The Governor,  Babatunde Fashola SAN , his wife, his newly elected Deputy Princess Sarah Adebisi Sosan, members of the Executive State Council, chairman of the organizing committee Mr. Disun Holloway, other members, several foreign tourist and excited Lagosians were all treated to thousands of  dazzling displays ,parades, and thrilling performances  from the various Fanti groups and the six educational  districts while listening to rousing live musical band. 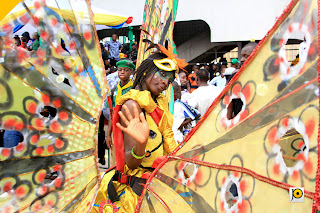 Earlier in the day, all major streets and routes connecting to the square was bombarded by almost 1200 carnival contingents dressed in colourful costumes themed with the coastal nature of the state, in the scheduled  road show, as they paraded and entertained with intricate leg works and breathtaking displays.
In his address the newly re-elected governor thanked  lagosians for their overwhelming support and faith in him as demonstrated during the last governorship elections in the state and reiterated his pledge to continue to pursue  people oriented  programmes that would impact the lives of all the citizens in the state. He buttressed his pledge by telling the rapt audience that all the costumes and effigy used for the carnival was entirely locally created and made by lagosians in the Lagos new skills’ acquisition centre in Isheri,  in his bid to create more jobs for his people .He stressed that the city was being re-molded into a major tourist attraction for the dual purpose of  boosting the state economy and lagosian pleasure. 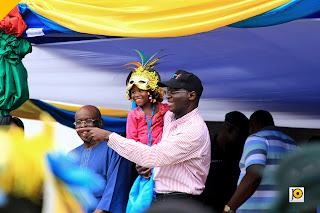 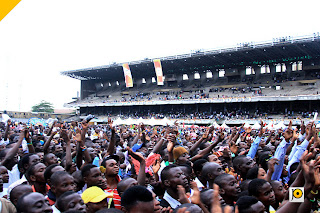 The trends making event ended with spectacular fireworks that made everyone in the attendance hold their breath in wonder tinged with regret that the event has come to an end.
Email Post