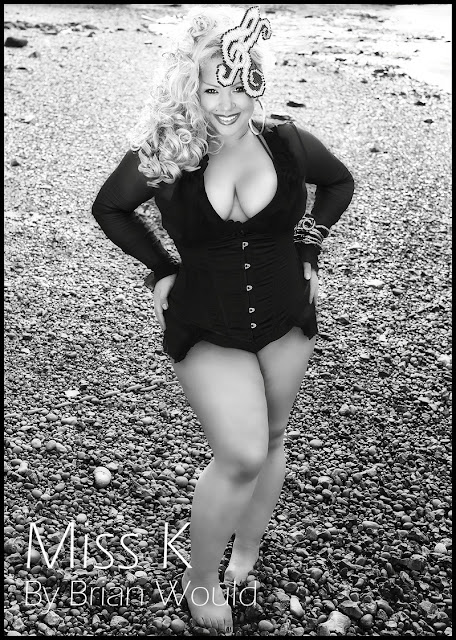 Miss k is quickly becoming one of the UK's most popular faces. A multi-talented woman, she has successfully branded herself as Singer/ Songwriter/ Model /Actress / Humanitarian but most of all as an Entrepreneur. Being an International citizen, she was born (Karina Theresa Martinez) to a Caribbean Father & a Spanish Mother who introduced her to the musical sounds of Salsa, Rock &amp; Roll, and Gospel. However, Miss K’s musical influence is as varied as the Hip-Hop sounds coming out of America, to the Caribbean beats of the West Indies, to the more personal influence of her older brother who is an international DJ, DJ Suga Kan'n
After giving a shot at singing on stage at few events and working as a co-host on one of the biggest Caribbean Radio Stations in Paris (96.9fm Tropical radio), she moved permanently to the UK (London City) where she featured on several tracks and eventually was given the opportunity to be part of the open act at a concert for the American Hip Hop group “The Roots”.

In 2008 Miss K Became the first Caribbean face ever to Model for MTN - (one of the largest Telecommunication Companies in Nigeria) the pictures in which she featured in were advertised all year long on billboards, calendars, scratch cards, magazines, and press across Nigeria. Her trip to Nigeria gave her the opportunity to be guest star in several music videos notably “Banging” by Ruggedman and “No be Small thing” by Ayzee Yo featuring Tuface amongst a few others. And most recently in "Nubian Queen" by BigBoy. Miss K’s passion for giving back and making a difference is evident in her humanitarian work as she has helped raise awareness and funds for "Green Nigeria" creating a better tomorrow for the children of Africa......
2009 saw Miss K’s versatility, as she branched into Acting in a new TV sitcom called “ Night Life ” for a London community project soon to be aired on BEN Television UK. But her long wished dream is to appear in a Nigerian Movie.
2010, looked bright .The beginning of the year had Miss k gracing the covers of a Few African Magazines for instance ModeMen January issue, Movietainment Magazine  Feb Issue, and Runway Magazine March Issue et al.
In March -Miss-k Became the First ever face for fine Handmade Jewellery Company PTB , having proven herself to be what PTB represents, Fresh, Fabulous and FUNKY!
April - saw her to become a Presenter for Fashion show Organised by "Jelly Me" PR.
In June- Miss k was contracted to appear as one of the Head Models in the African fashion show representing Nigeria, organised by the Nigerian High Commission at the Excel Centre.
July -Miss-k became a Judge for a pageant show Titled:"Miss Elegant”, which was filmed and aired on BEN TV channel 184..In the UK.
In 2011, Miss-k packed her bag for a Promotional Tour in Nigeria Africa for a 3 months Period. Her latest projects includes a song specially made for charity, which reflects the love she got for Africans and Africa. The Charity Single is Titled : "Stand up for Afrika". A live Soul Acoustic Version, Dedicated to the Motherland, talking about the richness which Africa holds. It has now reach availability all over Nigeria on MTN &ZAIN networks for phone ring tones and caller tunes, but will soon be released on I-tunes, Rhapsody, Amazon et al.
This NEW YEAR 2012 however, the Social landscape will warningly embrace one of, African descent from the Diaspora, none other the lovely Mercurial and multi-talented blonde bomb-shell, singer and Plus size Model, Miss-k.


Besides the large heart which she possesses, she also has a landmark package & gift she desires to offer Nigerians and the women most especially, in 2012. This she contends, goes beyond the exhibition of goodwill at Christmas but will be memorable and will impact on the future of the lives of Nigerians.

She says Nigerians should wait patiently for this gift and the unveiling of her forthcoming single.

She however is not entirely new to the Nigerian social landscape and Celebrity events scene; her lovely visage adorned, one of the earliest billboards advertising MTN, the leading mobile Telecommunications companies services. On  her last visit to Nigeria, her attendance at one Red carpet event prompted the new headline and attention grabbing picture & captions of the AFRICAN MARILYN MONROE , such as was seen, in many a social blog on the internet, news sites and printed local news paper.

Provocatively sensual and sexy is about what sums up this musical Divas, physical accouterments. From observation, following an investigation of her social experience and other musical and on stage accomplishments, she definitely can and will move mountains in the entertainment and humanitarian scene. Coined more appropriately from her own lips in reference to her recent picture profiling on the internet blog, she say’s,....“Well, they haven't seen anything yet, am  putting all my ‘ass-sets’, out to positive service for Africans and humanity.”
With this, we can surely say that Miss K is on her way. Like many she has BIG Dreams,  trying her best to reach each and every GOALS she set herself to achieve & always strive for more. Hence, this serves to water our appetites as connoisseurs of good things, as to what will be on offer this New year and beyond
For more info on Miss-k check out her fab blog on WWW.MISSKMUSIC.BLOGSPOT.COM