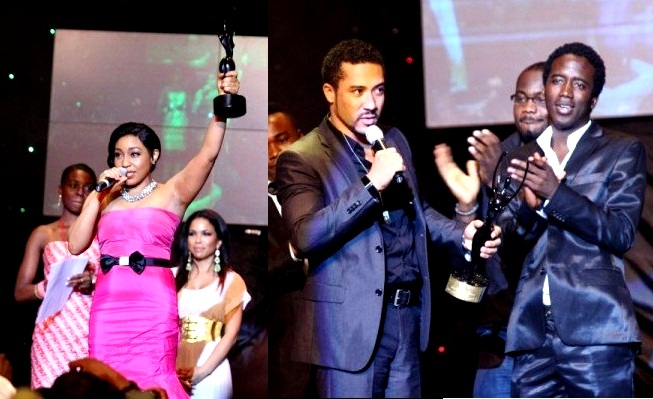 The African Movie Academy Awards ceremony which took place last nigh at the prestigious Eko Hotels and Suites Lagos Nigeria bore witness to a night of mega glam, fashion and rewards. Hosted by Heroes star Jimmy Jean-Louis and Nigerian actor O.C.ukeje, the star studded guests were treated to music by Africa’s finest; Asa and 2Face who got the house to their feet dancing.
Charlie Vundla’s How To Steal 2 Million(SA) won the most awards going home with five awards for Best Film, Best Director, Best Supporting Actor, Actress and Editing. Lancelot Oduwa Imaseun’s Adesuwa(NG) was close on the heels coming  second  with three awards for Best Costume Design, Visual Effects and Nigerian Film; while Sara Bletcher’s Otelo Burning(SA) who was previously in the lead with thirteen Nominations went home with two Awards for Best Child Actor and Cinematography. Rita Dominic and Majid Machel also went home with the AMAA Top Awards for Best ACTRESS and Actor of the year. We say congratulations to all the winners. Below is the complete list of Winners. RED CARPET PIX AND FASHION COURT COMING SOON......