Terrance sambo Vs L’espace vs wana sambo
By Millicent Arebun 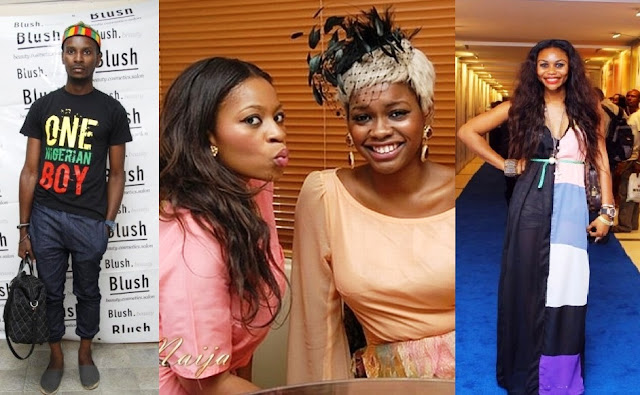 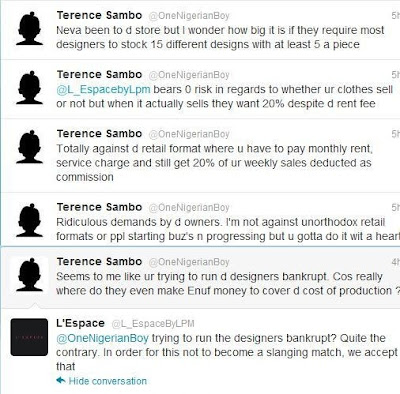 Terrence Sambo of OneNigeriaBoy.com a stylist, consultant, blogger, and fashion journalist, last week let off steam and engaged the L’espace team on twitter about his peeve with the way  the business of fashion was been handled by fashion concession store L’eSpace.  He expressed his displeasure about the stipulated  terms which  the designers who stock their items with the store  must operate under and in one of his twitter rants said ‘it seems to me that the store is trying to run the designers bankrupt’. This and more of his tweets prompted the L’espace people to issue a press release airing their views on the subject and terminating the contract of a designer Wana Sambo who incidentally is Terrence sister. This has lead to more back and froth parley between the key actors which are Terrance Sambo, the Le’space team and now Wana Sambo!

The question on everyone lips right now is; are the L’espace team truly running a business that is arbitrary and unfavourable to the designers, especially as theirs, is supposed to be an incubator which in actuality is supposed to help budding designers grow their fashion label to independence? Is the 20 percent commission taken out of the sales reasonable after paying about 19500 naira for monthly rent all things inclusive? Were they professional in their reaction and dealings with the blogger and his designer sister? Was the designer within his rights to tweet his displeasure? Was the gay knight comment warranted? All these and many more, are just a few questions that springs to mind but the most damning of all is the lack of a governing body that is set up to protect the rights, interest and designs of both the designers and the store concession owners.  Perhaps it is time the fashion industry in Nigeria really grew to have standard established institutions that will protect it from itself; for uncontrolled expansion or bloom is merely a fertile field waiting for anyone to take advantage of.  See press releases of both L’espace and Wana Sambo below.

Official statement from the L’espace team.
“Addressing the various allegations and claims made by Terence Sambo of @OneNigerianBoy tonight, the L’Espace team is simultaneously shocked and saddened to hear that anyone feels this way and we assume this is based on a recent miscommunication with his designer sister of WSClothing Co. First off, we’d like to clear up a few things. On bearing zero risk – Millions of naira in initial investment is very far from being zero risk. Anyone who runs an SME in this particularly hostile environment, would beg to differ, and perhaps even take offence at this cavalier attitude towards the risk any entrepreneur takes. And ironically, the commission actually gives us MORE of an onus to sell, simply because if we don’t sell. We make nothing. The fee as is, is nominal at best. On stock – We require SIX pieces minimum. Whatever the designer decides to do upward of that is his/her decision. And to be precise, the store is 670 sqm in total. Abuse is a very strong term and as one of the core L’Espace team is a designer herself, we find it irresponsible that this word (which conjures up images of slavery and child labour) is being used in this context at all. On ‘ridiculous demands’ ….. At every point we try to involve our vendors in the process and attempt to be as flexible as we can. The rate we are asking plus commission is paltry and whilst it might seem monumental at first, designers NEED to break out of the cycle of ‘spend the cash flow’ and living from order to order. Until you can produce and distribute at a certain level you will NEVER grow. On wannabe stylists …. It is clearly communicated to designers when their stuff is being used for an outside shoot or pulled by an outside stylist. However, when it is used for in-house content creation we assume notice is not necessary unless otherwise stated, simply because we are already liable for damage etc by default. For the record, we have worked with many ‘non-wannabe’ stylists Veronica Ebie-Odeka of Vane Style, Bolaji Animashaun, Lucy Love and Funmi SMD to name a few. On the following tweet most irritated by is dat they’re running d biz like dem guys in suits. Dere shld more soul since one of d owners is a designer 2 we will not be commenting because we feel it is unprofessional and the opinion of the blogger/tweeter, however misguided, is his own. In general … L’Espace is a 3 month old business with huge running costs. The initial business idea was based on the premise that most young, up and coming designers cannot afford the high rent and maintenance costs of a space like ours, hence the cooperative competition model. Unfortunately, should a designer be unable to cover the 50k+ sum plus commission, that is an indication that perhaps, the business is not quite ready to go past the incubator stage yet. Lastly, we are a growing business and try our very best to find a business model that works for all parties and will help our industry grow from where it really matters – commerce. We changed it a little to be more accommodating and we have been pleased with the results so far. We are understandably distraught that WSClothing Co will be leaving us momentarily, we wish you the best of luck going forward.”

Wana Sambo reaction and official press release.
“On the 15th of Feb, 2012, Wana Sambo Clothing, a Women wear brand, received an e-mail from L’espace, a multi-brand concept store/retail outlet located in Victoria Island, Lagos, Nigeria, inviting Wana Sambo Clothing to retail at their store through a new revenue model they were testing.
On the 22nd of February, an agreement was entered stating Wana Sambo Clothing was to pay the following to be a part of L’espace:
a)     N50,000 as monthly rent
b)     N15,000 as monthly service charge
c)      Choose from either a 3 months or 6 months upfront payment option
Wana Sambo Clothing chose the 3months  upfront option and paid the sum of N195,000 on the 1st of march, 2012.
Wana Sambo clothing started retailing at L’espace 15th of March and on the 17th of March 2012, a sales report ending 17th of March 2012 was sent to Wana Sambo Clothing with a total of sales for that week.
By the 28th of March, Wana Sambo Clothing received a 2nd sales report ending the 24th of march and it stated the amount of sales made that week with a new term added to it: a 20% commission being taken off sales.  Also attached to that e-mail was an amended version of the first invoice WSC received which now had the total sales plus a 20% commission taken off it.  This meant that a 20% commission would be deducted weekly. Once this e-mail was received, Wana Sambo contacted L’espace to query this new term/development as this had never been stated in any of our written or verbal agreements and L’espace replied saying (a quote from the e-mail) “…the 20% commission was not included in the agreement because we are still testing the new revenue model…” I asked them to put a hold to any payments into my bank account from sales until I get back into the country, as they were aware I was away for a period of time. L’espace replied me the next day with a contract termination notice, making mention of their assumptions that One Nigerian Boy, a fashion blogger, who is also my brother, was sanctioned by my brand to launch a “guerilla attack” against them on twitter.
First of all, It was not stated by L’espace at any point that I would be paying a 20% WEEKLY commission on sales after my rent and service charge had been paid in full. I run my studio at No 11 Augustine Anozie street, Lekki Phase 1, Nigeria, agreeing to retail at L’espace was a way of giving clientele another point of purchase and it seemed a smart way to push for the growth my business.
I would like to make clear that I, Wana Sambo of Wana Sambo Clothing can not influence the topic of Fashion Blogger(s) either as a sister or as a designer in the Nigerian Fashion Industry. Terence Sambo of ONB is a Fashion Blogger and he is within his rights to discuss whatever issues concerning/affecting the fashion industry as he pleases, I cannot ask him to not do his job neither can I tell him how to do it. Mentioning the Wana Sambo brand in a press release about his tweets when he clearly made no mention of Wana Sambo Clothing as the source of his information, simply because he is my brother was most unprofessional.
In reference to a portion of their press release, L’espace attempted to slander the Wana Sambo brand, making all sorts of insinuations about the brand’s financial strength and moneys already paid to them.
L’espace publicly terminated our contract without facts and without giving notice based on the terms of the agreement by both parties. Wana Sambo Clothing has upheld every part of the agreement and L’espace has no right to terminate the contract. L’espace on the other hand has constantly violated the terms of the contract agreement by firstly taking a 20% commission from WSC sales without prior notice, secondly on the same day sending an e-mail saying “Your stock will be taken off the shop floor at 11am today” and “we are more than happy to terminate.” (Please note that I received this e-mail after they had already issued out a press release.)
I sent L’espace an e-mail asking them to take down the press release as it was wrongly aimed but they still have not up until now, 30th March, 2012 at 1:53am. Wana Sambo Clothing has also not gotten a reply to the e-mail sent to L’espace addressing this issue.
I am not trying to be a whistle blower but for the sake of entrepreneurial spirit, I hope this issue can be settled more amicably as it has already been blown out of proportion.”