Eldee, Darey, Brymo, Ajebutter, Basketmouth, Mai Atafo And Others Set To Light Up The FAB Night Out 2012 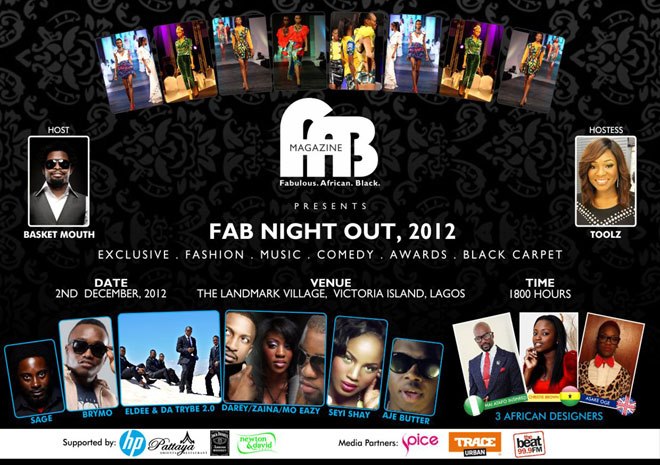 In the light of the upcoming Award and fashion showcase event in its 3rd year, the FAB Magazine’s FAB Night Out 2012, Nigerian artistes who were nominated for the award have been catching the excitement and wooing fans to get their votes.

This artistes include Mo Cheddah, Sasha and and Chocolate City’s Ice-Prince. The third edition of FAB Night Out is set to take place on Sunday 2nd December 2012 at Landmark Village in Victoria Island, Lagos, with black carpet starting at 6pm prompt. FAB Night Out 2012 will be hosted by Basket Mouth and on-air personality Toolz of Beat FM who is also a judge on MTV Base VJ Search.

The stage will be set for some of the most celebrated names of Nigerian music who will be performing live on the night; eLDee and Da Trybe 2.0 including Aramide, Sojay and K9; Darey and the Soul Musik crew including MoEazy, SeyiShay and Zaina; Brymo from Chocolate City and AjeButter.

On the runway showcasing their latest designs will be Nigeria's Mai Atafo Inspired with dapper menswear designs and Asake Oge from the UK with glam eveningwear, also, Ghana's Christie Brown will showcase her creative African-inspired designs.
Beyond fashion and entertainment, FAB Night Out will feature spoken word by Sage Hasson and a keynote address by author and change agent Adewale Ajadi.

FAB Night Out 2012 is supported by Pattaya Oriental, Newton and David, Jack Daniels and Hewlett Packard. Who will present two lucky winners with brand new HP laptops on the night as a FAB gift.

Public voting which closes midnight on 30 November 2012 can be done online at www.fabmagazineonline.com/awards/

The FAB Night Out 2012 will be streamed live at
www.fabmagazineonline.com/fab-tv/

Email Post
Labels: Ajebutter Basketmouth Brymo Darey Eldee Mai Atafo And Others Set To Light Up The FAB Night Out 2012