Tonto Dikeh Tells Yvonne Nelson her Vagina Is Wide As A Canal... 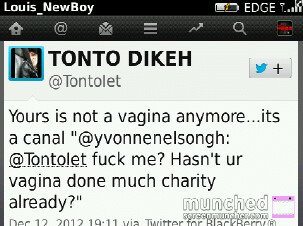 When I saw, the tweets between this two celebrated and super talented actress, the first thing i felt was shock, deep disappointment and gross disgust, that two brilliant females , who are role models to many ,  could be reduced to this state ,by a mere upstart male,  because of what is hanging between his legs.
It seems, Gollywood Actress Yvonne Nelson, whose heart was recently broken by the Iyanya,  over rumours of another affair with Nollywood star actress Tonto Dike, had the brilliant idea to tweet something nasty to Tonto , who will all know does nasty in spades. She replied in kind and the result is this post.

Even if Iyanya  jewel stick is supersized and super good, nothing should have made these gals descend  so low as to using obscene languages on themselves, meanwhile, Iyanya is probably out there, perfecting his bedroom prowess on another unsuspecting female, while they curse out their private parts on twitter.
Maybe, this is another publicity stunt by celebrities, but we sincerely hope these ladies, could get their acts together and quit been juvenile.