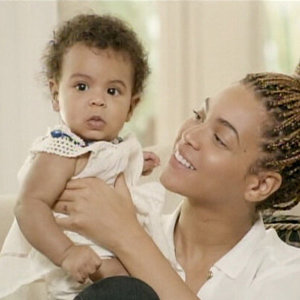 More than a year after her birth, Blue Ivy Carter is finally being shown off. In Beyoncé's HBO documentary, "Life Is But a Dream," which premiered on Saturday, the singer shares a touching moment of her with her now-13-month-old daughter.
But 24 hours before the baby’s big debut, a still from the 10-second interaction was leaked on Twitter … and instantly became a retweet phenomenon.
In the shot, Blue – clad in a white crochet sundress – is standing up on her mother's lap as Beyoncé, her hair in braids, is beaming from ear to ear at her pride and joy.